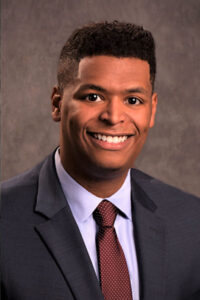 Finley L. Newman-James has joined the Dagger Law team as an Associate Attorney serving Dagger Law’s Lancaster as well as central Ohio offices, located in Canal Winchester. He engages in the general practice of law, with an emphasis on civil litigation.

“Finley has distinguished himself through his prior experience and in law school,” said Jeff J. Spangler, co-managing partner at Dagger Law. “He possesses the skill set to achieve great success in the future both in the legal field as well as in our community, and we look forward to his contributions.”

Prior to joining Dagger Law, he worked at the Columbus office of an AmLaw 200 national law firm, where he worked on a variety of litigation and corporate transactional work.

Newman-James earned his Juris Doctor from The Ohio State University Moritz College of Law in 2020. During his time in law school, he served as Business & Marketing Editor for the Ohio State Business Law Journal and was a member of Moritz’s Entrepreneurial Business Law Clinic, where he helped advise emerging small businesses, startups, and local entrepreneurs on a variety of business concerns, including formation/incorporation, equity agreements, tax planning, promissory notes, trademark registrations, licensing, employment agreements, brand enforcement & protection for businesses engaged in e-commerce, and corporate governance. In addition, he served as Treasurer of the Real Estate Law Association and published The State of Marijuana in The Buckeye State and Fiscal Policy Considerations of Legalized Recreational Marijuana, part of Ohio State’s Drug Enforcement Policy Center’s Paper Series, in the summer of 2019, which analyzed the fiscal policy considerations of a then-current proposed constitutional amendment on state and local governments.