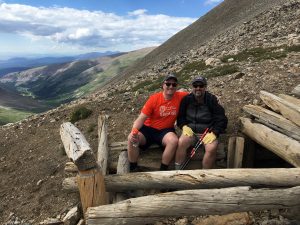 Lancaster, Ohio – For the second time a Lancaster High School graduate is “moving mountains” to bring attention to and raise funds for multiple myeloma research. Mitchell Happeney, son of Marcy and Randy Happeney of Lancaster, is part of the “Moving Mountains” group sponsored by the Multiple Myeloma Research Foundation (MMRF). The group is climbing Mt. Democrat (14,155 ft) in Colorado to raise funds and bring attention to multiple myeloma treatment and research.

Myeloma is a cancer of the plasma cells in blood. It can collect in the marrow and bones and thus is sometimes referred to as a bone cancer. Approximately 100,000 persons in the US have the diagnosis with 25,000 new cases diagnosed every year. It is a “treatable but not curable” form of cancer.

The Multiple Myeloma Research Foundation (MMRF) is a non-profit organization formed to raise awareness and funding for myeloma research.

Mitchell’s father, Randy, a partner at Dagger, Johnston, Miller, Ogilvie & Hampson, LLP, was diagnosed with multiple myeloma in September 2008. He has seen every form of treatment in the past 9 ½ years for this form of blood cancer.

“I have had five or six different types of chemo, one bone marrow transplant and five rounds of radiation, said Randy Happeney, partner at Dagger Law. “I have had one joint replaced and one repaired. I have participated in two clinical trials, one a complete success and one a total failure. As each year passes, the treatment improves and they move one step closer to a cure. I am very fortunate to have been diagnosed in this “golden age” of research and MMRF has led the way in bringing attention and funding to this rarer form of cancer. I am also very fortunate to live 45 minutes from The Ohio State University James Cancer Hospital which is at the forefront of research and treatment. It is very cool to have a child who takes such an interest in participating in finding a cure.”

Mitchell Happeney climbed Mt. Kilimanjaro in Kenya in February 2017 with the MMRF Moving Mountains group and raised over $15,000.00 for research. The elder Happeney could not participate in that climb due to treatment and the higher elevation (19,341 ft.).

“My goal has been to raise awareness of this disease and hopefully, have a direct impact on my dad’s treatment,” said Mitchell Happeney. “His philosophy that this cancer is an “inconvenience” is an inspiration to anyone who has not had to go through the rigors of cancer treatment, in his case for 9 ½ years and counting.”

The senior Happeney has not allowed the disease and the treatment to impact his professional career is echoed by his partners.

“For every year since 2008 Randy has been one of the most productive attorneys in our partnership in terms of hours billed and revenue raised,” said Jeff Spangler, managing partner of Dagger Law. “This includes lengthy periods when he was in chemo up to six days per month, and when he was out for six weeks due to his bone marrow transplant. He does chemo on Fridays so as not to disrupt his work week. We have to tell him (along with his wife, Marcy) to slow down.”

It is purely coincidental that in 1999 Happeney and his then 12-year-old son, Mitchell, tried to summit Mt. Democrat while in Colorado on a family vacation. They ran into 50 mph winds between peaks (Democrat and Lincoln) and were forced to retreat.

“We hope to both summit this time,” said Randy Happeney.